We have made great progress on Dark Fall 4 over the Christmas period. Now officially called Dark Fall - Storm Warning, the new ghost hunting adventure is looking and sounding super, in full 3D. The game is set on a faithful recreation of the Bazalgette Pier, on the Dorset coast, with an emphasis on the paranormal and lingering nostalgia. In terms of tone, it's most like Dark Fall 1, with a mystery to solve, while exploring the beautiful, but derelict ruins of an old Victorian setting.

Older readers (!!) will remember my interest in a Dark Fall pier game from a few years back. Hastings Pier had just been destroyed by fire, an arson attack, which was very miserable. I have very fond memories of the pier, from childhood, so the new game is infused with my own nostalgia, rose tinted by time and saddened by the truth of the piers demise. It's a perfect place to set a Dark Fall game. The ghosts are still out there, you see, waiting on the pier. An 'anniversary haunting' if ever there was one. 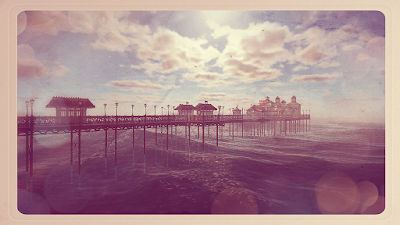 A group of (strangely familiar) ghost-hunters took part in a 'less than legal' experiment on the Bazalgette Pier, back in 2005. There are few documents or evidence files, but what does exist is pretty creepy: evps, poltergeist activity and an impressive time slip (my favourite).

Blackenrock is up first (sorry! I had kidney stone issues in December), then Shadow Tor's 'Bracken Tor' (now a more logical follow up to Barrow Hill, thanks to Matt's 'The Dark Path'). We really must get the older productions out, and done, before DF4 can have its big splash, but it's certainly something to look forward to. If you like ghost stories, old abandoned places and adventure games then you're in for a cool spooky experience. It's the sort of game that I wish there was more of, as a lot of the supernatural games fall back on demons, gore and weapons.

DF4 is all about experiments and time-slips, with a strong sense of dread rather than outright horror. But, it's still going to have plenty of spooky bits, very much like the first Dark Fall. You could see this new 3D instalment as a re-launch of the series, using new technology with an eye on PCs and consoles. It's time to face the future, by diving into the past.