on January 05, 2017
Here's a couple screens from the next Dark Fall game, Storm Warning, as well as some shots from 'behind the scenes'.

Lots of memories of Hastings Pier are/will be evident in the new game, which has a certain level of nostalgia infused throughout. Pier fans may recognise the ironwork from Penarth Pier, in South Wales. I didn't nick them, honest!, but recreated the style after visiting the pier a couple of years ago.


There's also quite a lot of Brighton's old West Pier in Storm Warning. West Pier collapsed in the 00's, but there's loads of photos online, as well as a few YouTube video tours. It looked very cool, back then, feeling quite ghostly and decrepit. I'm trying to summon a similar feeling, especially during day time scenes. Romance rather than terror, during the day at least. Night time, when the storm sets in... that's when the horrors come out.

We've been to a few piers, on the way to making this game. It makes sense to visit the source material, as I'm a bit lazy when it comes to reinventing the wheel. If it was good enough for the Victorians, then it's good enough for me. Unfortunately, West Pier and Hastings are no more, but Penarth and Paignton are good examples of what I was after. Both are quite a bit smaller than Bazalgette's, but they are perfectly formed. Paignton had a big facelift recently, leaning more towards a retro classic look, which was great. We had good fun during Storm Barbara, last month!

There are a few arcades, here in Looe, one of which is quite a cavern of noise, lights and dodgy prizes, so nothing has really changed since the 80's. That is the last time the Bazalgette Pier was open, before being cosed for good. No-one wanted the responsibility, after what happened. Since then it's passed between several agents and council authorities, but to no avail. The pier will fall, lost forever, if an owner/descendant is not found. Perhaps that person is you? 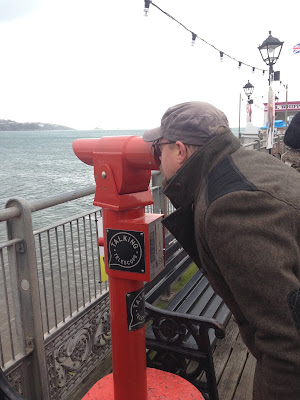