Midnight Horror has been updated (again!) to include a new 16:9 monitor ratio option.

Laptop and Widescreen Version available from me, here. 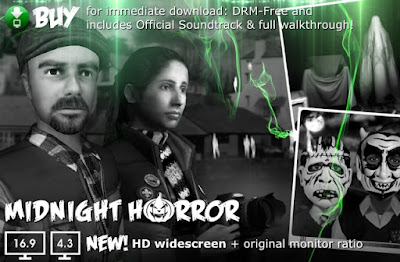 What does that mean?

Laptops, wide-screen monitors and big screens can now display the game FULL SCREEN with no black bars left and right. Also, laptop owners, with a maximum height resolution of 720 can also now play the game.

Sorry it took a bit longer than expected, but we decided to 'kill two birds with one stone'. It also means Blackenrock is now being converted to the new system, which suits all, saving complications later on.

This new version is available from me, DRM-Free + Soundtrack, with a STEAM update planned for next weekend.

Why the sudden change?

It became obvious, after launching Midnight Horror, that no-one (well, it seemed like no-one) uses 4:3 monitors or TV's anymore. I must be really old fashioned, because my eyes still see my work in 4:3. It's been quite liberating to ditch the old ratio, and go BIG full-screen. 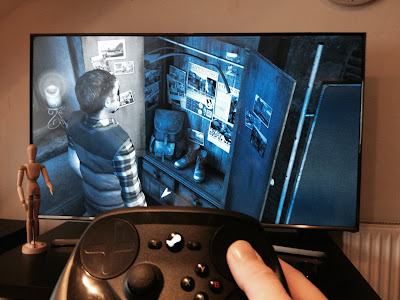 I played through the game with my parents, last weekend, on a widescreen, using the brand new STEAM Controller. This might sound silly, but it felt like I was playing a proper big game. The picture was huge, crisp and full of detail, and not using the mouse stopped the experience feeling like work. Sitting on the sofa is much nicer than sitting at a desk.

So, my plan is to look into adding more controller functions. Quitting close-ups, puzzles and converse with a controller button is quicker than scrolling across screen, menu should come up when you press 'start' and so forth. Also, don't panic 'mouse' fans; the games won't be ditching the older control methods. It'll just be good to offer a more modern alternative.

The plan is to release Blackenrock ASAP, December or New Year, depending on how fast we work.
After that, I'd like to release GHOST/watch, as it's been lingering (hauntingly!) on my machine for over a year. It's probably one of the weirdest casual game experiences you'll play, with an emphasis on 'expect the unexpected' when spying on ghosts.

Also in the New Year, there's Shadow Tor's 'Bracken Tor' to release. If you're a fan of classic point'n'click games like 'Shivers', 'Myst' or, in fact, 'Barrow Hill', you are in for a treat. It's a puzzle driven, spooky experience, like the first game.

After that, I'm off down the old seaside pier for some creepy ghost-hunting fun. Dark Fall 4 will be in full 3D, using Unity 5 to present something both familiar but totally new; lots of nostalgia, plenty of exploring (quite UrbEx in places) and tons of puzzles. I love puzzles, they stop games being Walking Simulators. I've got nothing against virtual strolling, but with noting to actually 'do', I find it hard to justify the time wasted spent looking around a virtual space. Maybe if I had more time? Who knows, but DF4 is narrative and puzzle driven, with an emphasis on ghost-hunting, detective skills and physical exploration. I'm really looking forward to it.

Then, after that (!!!), I guess Hallowed Isle is still lingering in the mist. Two Crown games in a year sounds like a bit much, after years of nought, but they're quite different games, in terms of story and tone. I know this because I've got 5 years worth of voice-acting on my hard-drives! There's a lot to get through, and produce, so… without further ado, I'm going to get back to it!

Thanks for reading, and to those who enjoyed Midnight Horror a bigger thanks! It was great to finally beat the curse of Halloween and move on.