on August 29, 2011
--
Debut screenshots! It had to happen eventually, so the end of the long August Bank Holiday Weekend seems a good a time as any. I've been keeping things very close to my chest, of late, so it's great to finally let a bit of Saxton leak out, into the world. It's a bit painful, as I can't help sense there are spoilers (the bane of many producers these days) soaked into every scene. But, I can't be overly protective, 'cos that would be silly. So, here's the first set of screens from 'The Last Crown - Haunting of Hallowed Isle'. Hurrah! 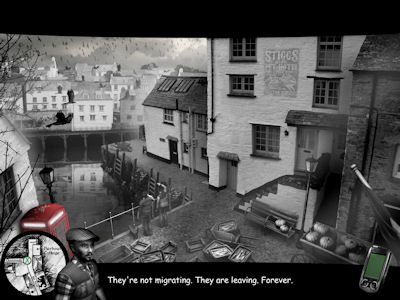 This shot is new, as you can see. I wanted to freshen the place up, after The Lost Crown,meaning an extensive re-shoot of ALL locations was required. I wanted a higher resolution too, to get more detail on screen. So, it gave me a chance to seek out some lesser known corners, while also begging for new angles. The only way to photograph Polperro (Saxton's real-life double), is to get very high or very low. So, talking people into letting me into their bedrooms and attics has been an experience and a half. Well worth it though.

I really like this new Saxton Harbour shot as the place now feels 'right'. It is geographically more accurate, and easier to place in the game world. In other words, you can see more places and how they connect to the harbour. It was a tricky shot to get, leaning out of the upper window of The Blue Peter pub. But, it's the only way to get less familiar views of somewhere that has been painted and photographed thousands of times.

Map: The map is also going to be handy. As an adventure gamer I have a fondness for in-game maps. They are jolly useful, both to the gamer, and the creator. Lots of the gameplay in The Last Crown is non-linear and Quest based, so the map will act as a handy record of what you are doing, why you are doing it and what effect it will have on the gameplay. 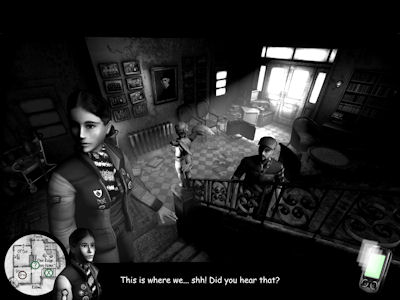 The GhostGadget: This is also new. Instead of lumbering around with an E.M.F Meter, Nite-Vision Camcorder, Dictaphone and Digital Camera… phew… we now need only the Hadden GhostGadget. It's an 'all-in-wonder' device, which covers all the basics, as well as offering customisation and upgrading.

Customisation: This is something I wanted to do in the first game, but couldn't quite get my head around it. Not enough, anyway. But, I've now had plenty of time to think and plan, and create some interesting ideas.

For example, the basic lens on the GhostGadget is good for newbies. If you want to photograph a blurry grey figure, looking all ethereal and strange, the basic lens would be fine. But, Lucy is more practical than Nigel, so knows certain improvements could be made, or at least attempted. In his workshop, Bob Tawny is on hand, for the fiddly stuff, so it's up to you to find, install and use any upgrades you find or make. 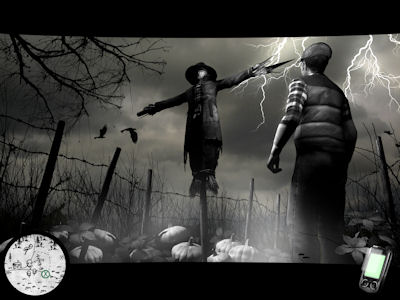 My favourite is the Fire Lens. It is made from a shard of glass, taken from the burnt ruins of the School House. Placed on the GhostGadget, the Fire Lens allows the ghost-hunters to 'see' and hear the fire, from many years ago. With the inferno comes the 'voices'. Not ghosts as such, but 'echoes' of a past event. It's as if the event is burnt into the glass. Filming through the lens will reveal far more than you thought possible. After all these years, you may be about to solve another of Saxton's mysteries. That being, who burnt down the school?

Obviously, once acquired, the Fire Lens can be used elsewhere. There are quite a few different lenses, but trying them out is intuitive and rewarding. You are looking to get good scores for your ghost-hunting, and move on to bigger things. But, if you just want to dabble for a while, and capture some more creepy wispy shapes, that's fine too. You'll just take longer to get on to those 'bigger things'. It's all about pace, I suppose. I like the idea of gamers having their own experience, in their own time and style. It's tricky to write, but I'm quite happy with the technicalities. We're not talking a full-on RPG here, just the opportunity to bend the narrative while approaching situations in your own way. (As for the walkthroughs! It'll be a fun one to write, promise.) 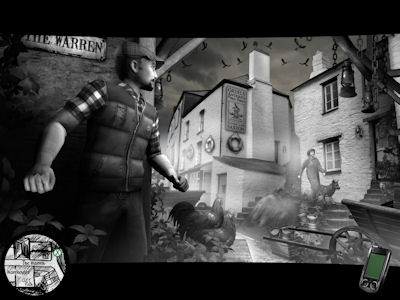 Lastly… I am relieved to confirm that, after an agonising wait, there is a third 'Crown' game in production. Following the 'Lost Crown' is 'The Last Crown', then the final instalment, currently titled 'The First Crown'. Eccentric titling aside (!!), there is a logic to the series, which investigates the three Anglo-Saxon noblemen, who arrived on Saxton Shore, many, many centuries ago. Ganwulf, Pendraed and their father, Auldwulf. We met Ganwulf in game one, (we returned his Crown after stealing it!), next up we shall be meeting his brother, Pendraed. He's a darker character, much darker.

If Ganwulf was the spirit of the landscape, Pendraed is very much the spirit of the sea. This is why we are travelling over to Hallowed Isle, to seek out its ghosts, history and myths. The Last Crown definitely has a sea-faring queasy feel, as Nigel and Lucy attempt to steer a small fishing boat out to the island. It's fun, spooky, traditional fare, with plenty of Nigel's adored and hated 'DanversSpeak ™'. (Note, you will be able to skip lines this time!)

I'm really excited about making more games, as I feel it's what I've always wanted to do. Who knows, maybe after game three Nigel and Lucy will be taking assignments further afield? I'd love to trace the route of the Crowns, back through history, to the Saxons. Or, follow the Ager link out to the colonies, where the family line still continues (not good looking babies, that's for sure, and what's with the scythes!). Or, take a smuggling adventure with Spivey, Saxton's famous 'Seadog'. Plenty of ideas. Basically, there's plenty of flesh on the bone, given The Lost Crown was quite a lengthy game, so it'll be lovely to explore all the nooks and crannies that it presented.

The world of Saxton, with its folky atmosphere and ghost stories is really addictive to write! It's a pleasure to be able to create these little interactive films, continuing my love for adventure games, so expect plenty more from me. Maybe a bit faster too!

P.s. Large BitMap screenshots are available here, along with some text about the images: http://www.thelastcrown.com/lastcrownpress.zip