Lots of quiet activity here, in the Darkling Room.

As mid Autumn approaches, it's time to start digging out the ghost gadgets and make the trip to Saxton. The game is big, better, and more engrossing than the first. It's also allowed me to have a bit of fun with the promotional materials (trailers, screenshots).

In the next two weeks there will be a creepy teaser to watch; a haunted house, a lone night-vision camera, the ghost of child, strangely aware of us, watching.

The full Trailer; a blast from the past, as Pathe News arrive in Saxton to investigate 'Haunted Towns', interviewing no less than local ghost-hunter, Nigel Danvers! Pip pip jolly ho!

A video of the new main theme, with in-game scenes and menu characters, to illustrate the audio.

There's also likely to be a LOT of new screenshots appearing soon, as the game manifests. So, I thought I'd pluck out a few and say something about them.

The small harbour town is looking just like we remember it, but with a bit more life and variety. Day dawns, weather changes, the tides comes and goes and when night falls, the ghosts  come out. There are multitude of ghost stories to uncover, prove or solve.

The Environmeter is back in action. Harbour Cottage is no longer haunted by the Molinas (well done gamers!), so Nigel takes the cams out into the world. There are places to watch, things going on, and Nigel can't be in several places at once. But, he can WATCH several places at once. Keep 'em peeled, activity could happen at any time!

Here we see the Witch Fogou, atop Grindles Claw. It's an ancient place, carved with esoteric symbols, love hearts and timeless clues.

The museum, at night. Something has upset the resident ghosts (like Verity), but Nigel hopes to calm the situation.

The pump room and cellar, of The Bear. Eliza Mankle was crushed, between barrels, in 1846.

A dark chamber, with a stone circle. The source of the malignance?

The Saxton seen in Blackenrock is riddled with ghosts! They are everywhere. Some are lost, some are aware, whereas others are seeking revenge. But, surely watching paranormal events via the screen is a safe option, no? Sadly not. It appears some ghosts know when they are being watched.

Nigel and Lucy have become quite well known since we last saw them, standing on Saxton Shore, wondering what the future had in store for them. It appears the twosome have become quite the double act, investigating the dark supernatural side of Saxton. But, not everyone is happy with their ghoulish pastime. There are rumblings that Nigel's ghostly obsessions are drawing a 'bad crowd' to the sleepy little Harbour Town. 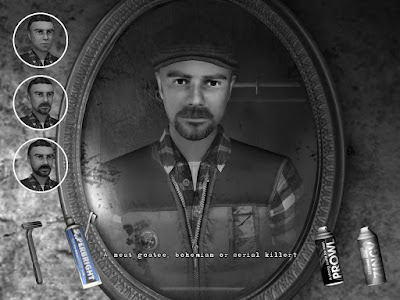 Brush your teeth Nigel! Trim that beard! Have a shower!
Nigel is no longer the total Stig that we encountered in The Lost Crown. Good job too! Nigel has to deal with all manner of local people, so a little bit of personal hygiene can't be a bad idea. But, be warned, PROWL is a vicious scent, and should only be used for 'special occasions'. Saxton is busy with tourists and locals, as the Autumn Festival reaches its peak. There are social events, activities and a disco to enjoy, in The Bear. So, who knows, maybe Nigel might meet someone 'special'. Appearance is everything.

Nigel has a new gadget to play with. Snappily called the Ghost Gadget, it is an All-In-Wonder. EMF, EVP and nite-vision all in one unit. Flooding a space with energy, the gadget is able to 'see' events of the past as well as current paranormal activity. The gadget also features a handy Quest list, map system, evidence folios and a deciphering tool for codes and ancient languages. In the next sequel we will be adding APPs for the device, as well as peripherals. For now, rest assured knowing that if it's paranormal, the Ghost Gadget will find it.

Next up, I'll be looking at the making of the trailer, and revealing the new cover.