From the past to the future…

Here's a new shot, from The Last Crown - Blackenrock, for #screenshotsaturday 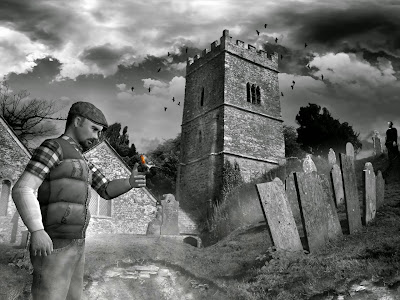 Ulcombe Church, along the coast path from Saxton, where Nigel Danvers will face a dilemma. And a ghost.

An eclectic work-load at present. I always think this part of a game dev project is a little like moving house; most things, important things, are neatly packed and catalogued, but there's always a random collection of odds and ends, which defy categorisation. This is the moment the LISTS get deployed. Lists of everything. Missing sounds! Missing gfx! Missing cursors! Missing characters! Yes, there's quite a bit of wrapping up, but it's steady, satisfying work, with the finish line in sight.

Looking towards the future, both the Crown and the Dark Fall games will benefit from some brand new, totally unique art objects. A new found fascination with 3D objects is partly inspired by the Ethan Carter blogs, but mostly from following Matt Clark [Shadow Tor Studios] around the moor scanning standing stones and barrows (thanks Matt!).

The image shows the remains of the Gold Mine, on Bodmin Moor, with Twelve Men's Tor in the far distance. A day on the moor is never disappointing, especially in dramatic weather. Drama that day was supplied by clouds and unbroken views for several miles. 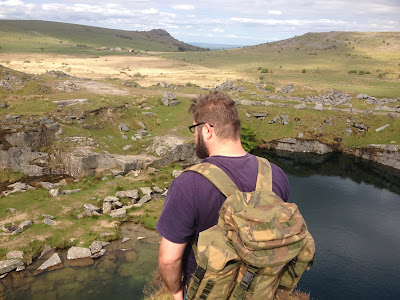 The archaeology work is great, and very scientific, but I like fiction! So, it'll be interesting to photograph some well known, maybe even over familiar, sites and give them a new, dramatic setting in an adventure game. The Crown games will remain 2.5D till the (very) bitter end, but the next Dark Fall is 3D, with eyes on VR, so I need beautiful and creepy things to look at. As a one-man-band most of the time, it's really daunting to imagine creating a whole worlds worth of STUFF. So, let's see what the real world can offer…

We've been experimenting with 3d props a lot in recent weeks. It's great to be able to pick a suitable object, from landscape and buildings, and capture it for use in narrative. It sounds like a cliché, but you really do see more detail once an item is singled out, so dramatically, from the world.

After some basic experiments, capturing urns and statues at Mount Edgcumbe, we've moved onto bigger things. Whole chunks of landscape, like the rocks at Hannafore (Pinnacles, TLC1), and detailed statues and memorials like Old Nick (Sir John Colshull, Duloe) are really impressive in 3D. It's also a bit creepy too, to know that they're real items and places. I don’t know why, but I find it quite eerie.

It goes without saying that you really can see things from a different perspective, with a 3D version. As the DOP, I suppose, on the TLC games I am always looking to photograph things to maximise impact, to create something picturesque. So, being able to jiggle things around, and transpose objects is a real plus.

Lastly, I've let this pic slip to the bottom, as I thought I'd include the poem/ballad that inspired it. It’s a dark tale of murder, on the Cornish Moors, beautifully written with a few dark twists. I know the Ager and Crown legends are Anglia based, and Cornwall has NOTHING to do with it, but I'm being honest when I say that Emily's unfortunate death, in the Saxton Caverns TLC1, was very much influenced by this sorry tale. It never fails to give me goosebumps.

The Ballad of Charlotte Dymond

It was a Sunday evening
And in the April rain
That Charlotte went from our house
And never came home again.

Her shawl of diamond redcloth,
She wore a yellow gown,
She carried the green gauze handkerchief
She bought in Bodmin town.

About her throat her necklace
And in her purse her pay:
The four silver shillings
She had at Lady Day.

In her purse four shillings
And in her purse her pride
As she walked out one evening
Her lover at her side.

Out beyond the marshes
Where the cattle stand,
With her crippled lover
Limping at her hand.

Charlotte walked with Matthew
Through the Sunday mist,
Never saw the razor
Waiting at his wrist.

Charlotte she was gentle
But they found her in the flood
Her Sunday beads among the reeds
Beaming with her blood.

Matthew, where is Charlotte,
And wherefore has she flown?
For you walked out together
And now are come alone.

Why do you not answer,
Stand silent as a tree,
Your Sunday worsted stockings
All muddied to the knee?

Why do you mend your breast-pleat
With a rusty needle’s thread
And fall with fears and silent tears
Upon your single bed?

Why do you sit so sadly
Your face the colour of clay
And with a green gauze handkerchief
Wipe the sour sweat away?

Has she gone to Blisland
To seek an easier place,
And is that why your eye won’t dry
And blinds your bleaching face?

Take me home! cried Charlotte,
‘I lie here in the pit!
A red rock rests upon my breasts
And my naked neck is split!’

Her skin was soft as sable,
Her eyes were wide as day,
Her hair was blacker than the bog
That licked her life away;

Her cheeks were made out of honey,
Her throat was made of flame
Where all around the razor
Had written its red name.

As Matthew turned at Plymouth
About the tilting Hoe,
The cold and cunning constable
Up to him did go:

‘I’ve come to take you, Matthew,
Unto the magistrate’s door.
Come quiet now, you pretty poor boy,
And you must know what for.’

‘She is as pure,’ cried Matthew,
‘As is the early dew,
Her only stain it is the pain
That round her neck I drew!

‘She is as guiltless as the day
She sprang forth from her mother.
The only sin upon her skin
Is that she loved another.’

They took him off to Bodmin,
They pulled the prison bell,
They sent him smartly up to heaven
And dropped him down to hell.

All through the granite kingdom
And on its travelling airs
Ask which of these two lovers
The most deserves your prayers.

And your steel heart search, Stranger,
That you may pause and pray
For lovers who come not to bed
Upon their wedding day,

But lie upon the moorland
Where stands the sacred snow
Above the breathing river,
And the salt sea-winds go.