on November 22, 2013
As a celebration of 50 years of Doctor Who, I snapped the TARDIS in and around a few Looe landmarks and locations. I've been watching the show since I was a nipper, 40 years ago. The good Doctor has visited Cornwall, on a few occasions, like The Stones of Blood, The Smugglers (filmed at Lizard and St.Grada Church) and Battlefield. The BBC also filmed a few non-Cornwall set stories too, such as Colony in Space and Curse of the Black Pearl. But, today, the Doctor popped by for a longer visit, to enjoy some sea air and fish & chips. 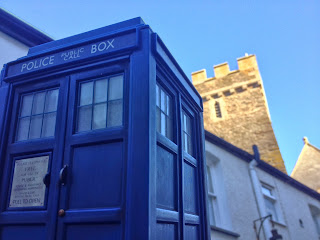 Arriving in the back streets of East Looe, the Doctor was puzzled why the air had a strong smell of English Breakfast.

'It's the lingering smell from the breakfast shift' said Sarah.

The Doctor looked puzzled, and frowned.

'Everyone eats English breakfast? At the same time?! That's very odd' he ruminated. 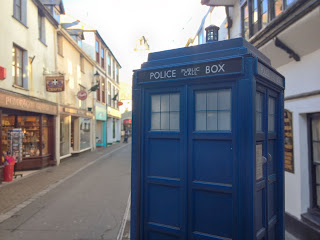 Time for a spot of shopping, on Fore Street.

After arguing with himself for sometime, the Doctor opted for 'none-of-the-above', and bought a pipe, instead. Sarah, meanwhile, enjoyed a chocolate torsade in the coffeshop, and wondered when cafe grub got so fancy. 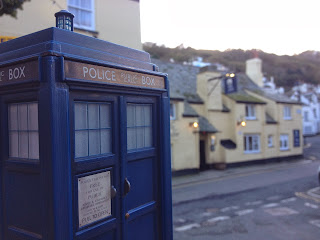 Having purchased a pipe, of considerable size, the Doctor sought a nice open fire, to rest his time travelled bones, and contemplate life, the universe and everything. This not being the 1970's, both Sarah and the Doctor were surprised to discover that smoking was banned, and, more disappointingly, there was no open fire either.

Chasing him back to the TARDIS, Sarah wondered where they would end up next. The TARDIS often seemed to have a mind of its own. 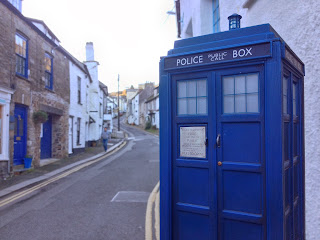 With a familiar wheezing groaning sound, the TARDIS dematerialised from West Looe. 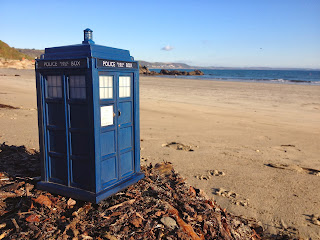 ... and rematerialised on the planet, ummm.... nope, that's still Looe.

'We appear to been trapped in this time, this dimension' said the Doctor.

'Well, I'm going to sunbath' stated Sarah, briefly forgetting it's bloody freezing, 'while you work out what's put the mockers on the TARDIS'.

Sarah marched from the TARDIS, wearing her best fur bikini, deciding that she wouldn't let the Doctor spoil the chance of a quick holiday. Being shot and chased by bug-eyed monsters was really quite stressful. 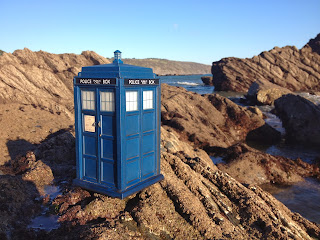 A few hours passed, as Sarah shivered in the November chill and the Doctor tinkered with his time machine.

'Some unknown force, or technology, is keeping us here... but why' puzzled the Doctor. 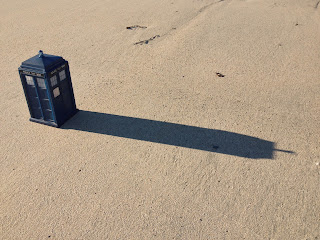 Attempting to make a 'short hop' and escape their predicament, the Doctor was delighted to arrive on the planet Aridius...

It was at this moment, that the big curly haired goon realised that he had left Sarah behind. 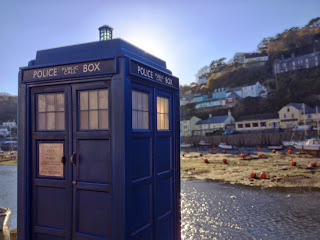 Resetting the TARDIS controls, the Doctor returned to Looe to search for his companion. The sun was beginning to set, over West Looe Hill.

'I had better hurry' worried the Doctor, 'because THEY come out, after dark'.

In a flurry of Time Lord activity, the Doctor searched every corner of the small harbour town, but Sarah was nowhere to be seen. Not in any time, or any place. 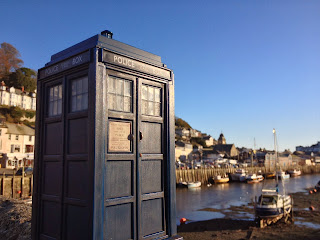 Eventually, knowing that he had but a few minutes to rescue his friend from Happy Hour, the Doctor bellowed from the bridge.

'Sarah Jane Smith... you hairy legged feminist, where on bloody Skaro are you?!'

Sarah, who was riding a massive sugar high in the Pick'n'Mix, was incensed by the insult, so marched up to the Doctor (her Andy Pandy outfit betraying the seriousness of the situation).

'Of all the confounded cheek! You bohemian, boggle eyed, crazy, alien...'

The Doctor interrupted her, simply by using his disarmingly massive grin. Sarah pouted, knowing she had been deflated.

'It's good to see you, Sarah' said the Doctor, cheekily, 'Did you get me some Jelly Babies?'

'Listen... I know what's wrong with the TARDIS' said the Doctor, in a whisper, 'come on, I'll show you'. 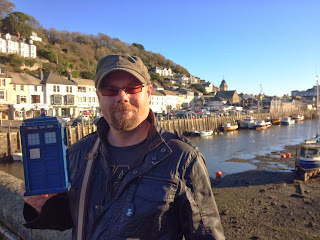 Happy Birthday, Doctor Who! You did good.