It's been 13 years since my first game.

With all the current interest in that game, Dark Fall, I thought it would be fun to drop a few hints about where I am going with the next instalment. Rather than a 'Dark Fall 4', I've been looking forward to taking the series in a new direction, down old wooden boards and out to sea... 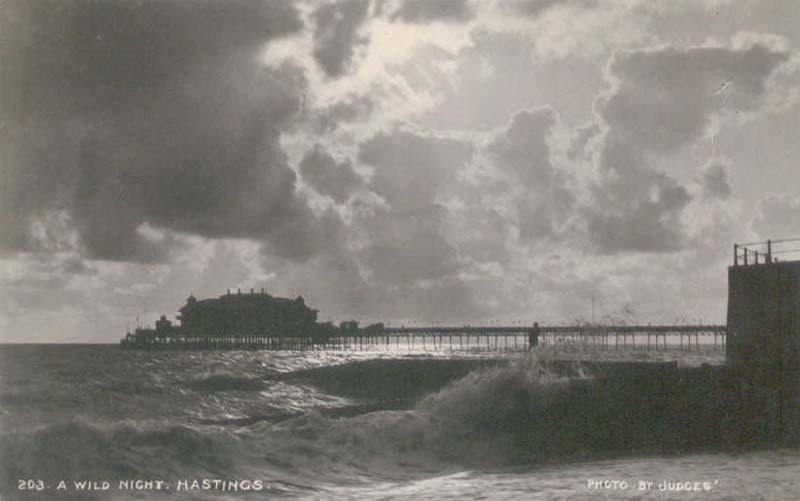 I've always been fascinated by the classic Victorian seaside pier. Many of my childhood birthdays, in Kent, were spent on Hastings Pier. I say 'were', because Hastings suffered an arson attack, a few years back. It was virtually destroyed in the blaze, after being abandoned and derelict for many years. Many must have mourned its passing, as it made national news, including this clip from the BBC.

I also mourned the old pier, but it gave me some cracking ideas for a new Dark Fall game. The intro scenes were dreamt up a few years back…

Midnight. It's chucking it down with rain, the sort of rain that soaks through to the skin and chills the blood. You are running for the 'last bus', along the old promenade, on a nameless seafront. Gloomy Victorian hotels, built for the affluent tourists of yesteryear, stare moodily out to sea across the road. To your side, the sea churns and crashes creating white water waves, which smash against the steep wall, down to the beach.

The skeletal remains of the old pier stick out of the turbulent water, a ragged reminder of a much loved place, now broken, battered and burnt. Access is denied, to all but the local vandals, who set fire to the pier, several years before. A rusted security fence, covered in warning signs, blocks entry onto the boards and buildings. But, the fence and the signs did not deter the bored youth, who thought nothing of a little arson now and then. They torched the pier, in a drunken moment, never to be caught or blamed. Are the police sure it was kids? 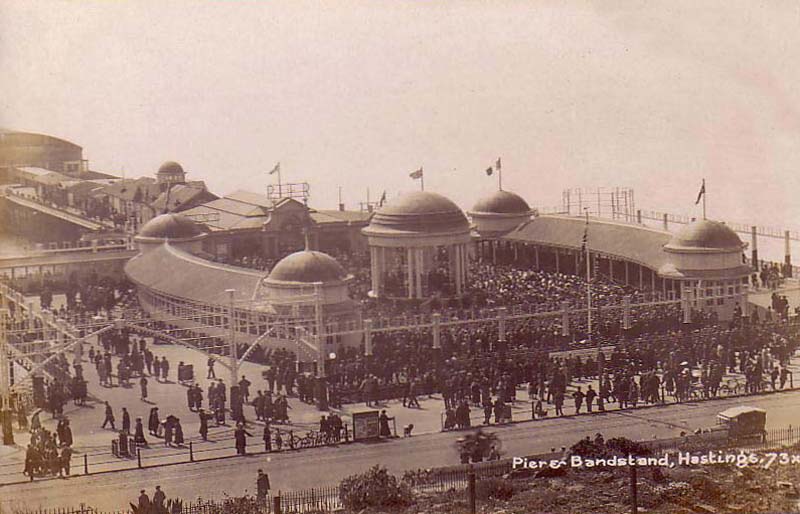 You wonder, briefly, whether the old place will ever rise again. It's not likely. The pier was a place destined to fall, an arrogant piece of frivolous architecture, constructed to defy nature by those seeking thrills and relaxation, in a time when stepping out, across the sea was an exciting and new experience. Do you remember your time on the pier? The arcades, magic show and gypsy fortune teller? Yes, you remember a little… just glimpses, flashes… of ice-cream, slot machines and sugary tea.

Snap out of it!

Yellow, flashing lights indicate the bus is about to pull away, you'll have to hurry. It's the last bus! You really don't want to miss it! But, you are suddenly distracted, just for a moment, by the distant cries of an unseen soul.

"Over here…" is all you could make out, over the roar of the sea and the crashing waves below.
But where did the voice come from? Surely not the pier?! Who would brave the rain, on a night like this? The pier is unsafe, everyone knows that! Plus the fact, it's forbidden to cross the boundry, to leave land behind, and walk the long wooden planks, along the pier and out to sea.

Then you see her, the sad looking girl, in the lilac floral dress. What's she doing?! Is she going to jump?! She has climbed over the guard rail, looking very much like suicide is her desperate plan. Damn it. Why would anyone do such a thing?!

Squeezing through the security fence, you dash to the side, before… before…

It's too late, she lets go. Her fall seems slow, as if time has slowed down. Was that a scream? No, it was a laugh! An ecstatic peel of girlish laughter, as she plunges down, to the expectant waves below. Leaning over the edge, you wonder if you should plunge into the water, in a foolhardy but brave mission to play hero… Then, suddenly, that laugh again. That girlish laugh, now vindictive and taunting.

Turning back towards the old pier buildings, you are surprised to see the girl, slip sneakily into the old ticket hall. Is it the same girl? How is that possible? A prank? A joke? An illusion? Were you supposed to jump? Was that the intention?

Enough games! You will not be made a fool of. But, turning back towards the road, and safety, you wonder why the town has disappeared within the sheets of rain. Is there a way back?

And so the story begins.

I've been down many piers, some in better condition than others, but all boast that certain charm that only eccentric Victorian endeavour can. A little like the elaborate railway buildings of the time, which I touched on in Dark Fall's 1 and 3. I guess I must really like that period in time, a robust era of industry and frivolity. They make super game locations and even better ghost stories. The idea of being trapped on the pier, for the space of a night is an exciting one. For research, and a trip down memory lane, I've been visiting a few old piers around the UK. A favourite was Penarth, in South Wales (a hop and a skip from Cardiff, if you know where to look). Like Hastings, it has seen better times, but it's certainly in better condition than many. Like Hastings, it has a mixed history and a fire. A ball room, theatre and cinema have come and gone from the old treasure, and the 1960's saw a night club installed. Folk liked to escape on the pier, it was somewhere outside of the world, a nowhere place situated out at sea. You could really lose yourself along those old wooden boards and forget the land you left behind. Again, great ghost-story material. Lots of these elements will be making their way into the game. To bring the game to life, I am planning on utilising newer technology in the form of the Unity engine. It's a superb package, which I am eager to learn. I have already made quite a bit of headway with the tech, finding the ability to look 'up' and 'down' a bit of a treat. Suspending the player over the roaring English Channel, with the storm raging above will, no doubt, be quite an experience. I can't wait!

But first, there's the small matter of Mr.Danvers, and his unfinished adventures to complete. So, for now, rest assured knowing there's plenty more paranormal adventures to come, from myself and the Darkling Room.