A few 'behind the scenes' images from The Last Crown, if only to show that I DO work. Honest! Very hard, especially this year. I did think about out-sourcing alot of the tasks, but I'm not sure I would have felt the same about the game, given that it's a very personal project, which I make and fund myself. So, there's been a lot of new things to learn (especially 3D software). I was bound by ability (lack of!) when making the first game, but I'm a bit more clued in this time round, which can only ever help the game be more enjoyable. 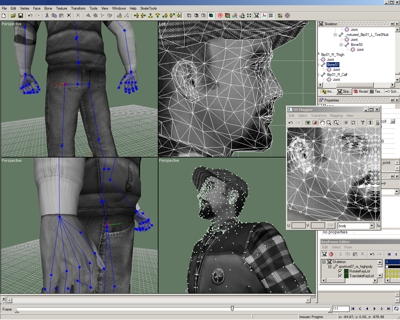 Working on Nigel, specially smaller details, like his safety pins, flat cap and beard. He's not exactly an action hero, no no no, but he is a lot more 'active' in the sequel and part three. He just moves better, and looks more 'alive'. Bit skinnier too. Perhaps Mrs.Slaughter has stopped serving those greasy slices of pizza. Mind you, Nigel never actually ate anything in-game. He fed it all to Cairan, the pig! So, with a pinch of a vertex here, the addition of a polygon there, the new Nigel is ready for action. In several outfits.

A new phone box has appeared too, on the Quayside. It was buried under lobsterpots for decades, but it's been 're-discovered' by Nigel and Lucy. As with all things in Saxton, the cover-up may have been for a reason. A good reason. Something connects the dwellings and businesses of town, with threads stretching out across the harbour, in all directions. In the centre of the the web is a building, which Saxton fans will know quite well. The letters G.P.O. may be a clue. One of the things that pleased me the most, in the Lost Crown, was all the movement. Fog, pollen, birds, rain, etc etc etc. It was cool. My previous games, Dark Fall 1 and 2, had been set with technical limitations in mind (and budget limitations). So, I created very quiet, still places. But, Saxton is set mostly outdoors, with all the lively trimmings of a Harbour Town! Argh! It just HAD to move. So, I've been working on ways to get even more going on, and push the game engine a bit more. Some think I'm mad taking the Wintermute Engine, and making it do things it wasn't designed for (1st person panorama game for example!), but I'm familiar with the software, so feel very comfortable. That's why I can experiment a bit, in confidence. Plus, it's more fun. I like seeing how far you can push things. It's also a good way of learning, without getting bogged down or distracted. I think I'd fiddle and play for far too many hours, if I was working in Unity, for example. So no full-3D for me just yet. That's another learning curve altogether. So, I'll save that for the next series. ;) Lastly, the first person to correctly identify Nigel's badge gets a free personalised copy of Last Crown, posted from Saxton itself, along with some contraband fudge! There's no clues, and the picture is quite pixelated... but let's see what happens.

Tip: All pics go to bigger versions, when clicked.