The treasure hunt is up and running! The clues are devious, the prizes are great and the sun is shining. So, if you are in the Looe area, before Thursday, get yourself an entry form from the Tourist Information Centre, The Salutation, The Jolly Sailor or the Looe Lifeboat Station. All proceeds go to charity. 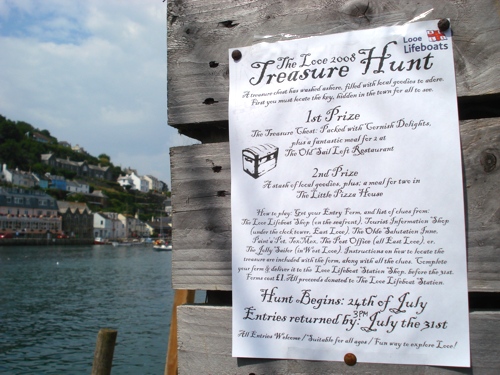 Matt and I had a fun old time getting the treasure hunt to work, while sneaking about town to put posters up. There should be a pic of one, above or below this text. If the event is a success – more than 10 people play! - we will think about doing another one, for next summer. So, anyone looking to help out, drop me a line.

Escaping town, (which is packed full of chip scoffing tourists right now), we took a stroll up to Waylands Fayre, yesterday afternoon. The event consisted of the same old Cornish weirdness (displays of old tractors, period motorbikes and homemade steam engines), but the trip was made worthwhile by the excellent 'Boot Fair' which runs alongside. Boot Fairs are a little like mobile Garage Sales. People pile there car boot (trunk) with tatty wonders, and try and flog them to people on hot summer days. They did quite well out of me…in all honesty…I came away with two new (shrink wrapped) Doctor Who dvds (Edge of Destruction and The Aztecs, should anyone be wondering), a collection of ghost-stories (my favourite) and four Beatrix Potter books, (always handy as gifts). That was the normal items…here come the strange ones!

Matt managed to find two bright blue Kolorkins, which he tells me are highly collectable teddies. I also bought, for 50p, a strange old Bakelite record (from the 30's I think), called English Country Dance. It's got one track, the spookily titled 'Black Nag'. I half expect, upon play, to hear the sounds of the Wayland Fayre from decades past…interrupted by the sound of the Black Nag, as it swoops from the skies to terrorise the Fayre. Much screaming and horror would follow.

On a similar note, I also spotted this rather spooky looking doll. Well, I think it's a doll. It appears to be a fawn, with a sad, glacial expression, and broken ankles. I really felt quite sorry for the poor little thing. 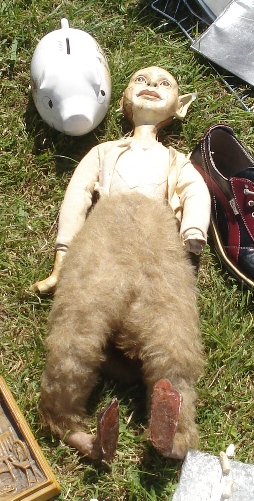 It was just lying there, with his piggybank friend, waiting for someone to rescue him. I feel a bit guilty now. But, where on earth would you put such a thing. Upon eying the creature, Matt mentioned that it looked like something that should be walled up in an old house. He is referring to the old custom of bricking up small holes with dolls, effigies and trinkets as protection against evil forces. Utter nonsense of course, but I could certainly see his point. I just hope someone takes pity on the poor fellow, and he goes to a good home. There's something rather tragic about a lame fawn with broken hooves.

Lastly, I'll make a quick mention of the excellent 'promotional postcards' sent out to magazines and websites, for The Lost Crown. Lighthouse have a done a super job of creating 'fake' Saxton postcards, with a note from Nigel on the reverse. The first mentions Nigel's first impressions of Harbour Cottage. 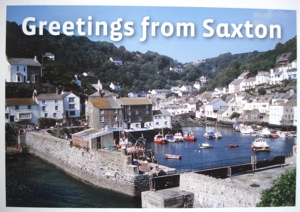 The second is more intriguing, and is distressed to suggest the postcard has travelled through time, or been in the system for decades. Of course, to those who have finished the game, all those ideas tie in with the gameplay, which is great. Large images of the postcards are in my pics area (Work Folder on MySpace), and the reverse image is also available...with Nigel's cryptic messages. 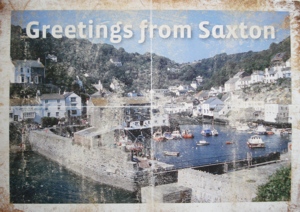 It's good to see a publisher getting the promotions right, for once, with some snappy ideas. It was a strange experience to receive the postcard through the post…from somewhere dreamt up by my own imagination! Surreal.

Anonymous said…
I am quite sure I said something about this post somewhere, but anyhow...That poor fawn. I just wanted to say those postcards are amazing!! I wish I could see the pictures on Myspace, but since I don't have an account, I can't look at them. Any chance on posting those on Facebook...:) *hopeful*. Anyway, I thought that's the cutiest idea to do, and so refreshing and new.
20 December 2008 at 00:07