The video went down quite well, exhibiting some of the projects we've been working on. But, it generated more questions than answers, so... here's some more info. ;-)

Fixed our DirectX issues, and broke up the project into smaller packages. Basically, it runs better. Thanks Matt! Nigel no longer randomly falls through the floor, never to be seen again, and the save game doesn't take 5 minutes to load. So, that's all good.

I took a break from this one, during February, for personal reasons. I had, rather foolishly, made the game as depressing and deathly as possible, so it was a bit much to go straight back to. But! It was great getting that demo out, before XMas, as I got to show some new stuff. Thanks Iceberg!

The new version of the game, in point-and-click is VERY Crown like. A lot of the weird focus, seen in TLC1, is lost on free-roaming. Nothing seems very profound, or interesting, without a bit of Directorial framing.

In full 3D, set on an old Pier, with two NPC buddies to hang out with. ;-)
It's a BIG project, needing lots of vaudevillian characters to record for voices, as well as a plan to do the ghosts as FMV. Having real people dressed as the magician, chorus girls and dripping ghouls will be a lot more effective on screen than 3D characters. Plus, my ghosts don't chase you around, so there's no need for a lot of kinetics. It will  be challenging making the outfits, but I know a few Cosplayers who are up it!

Anyone remember Orpheo's Curse? That did a great job inserting real people into the game world, just using still photos. So, I think video people/ghosts, plus the pier setting, could be really special. But, like I said, it's a BIG project, which I'm lining up for the 'anniversary' year.

Speaking of which... when is the bl***y anniversary?!

I made all the GFX for this one last Summer, while BLK got fixed. I've blogged about some of the props, and a desire to do a point and click for 'devices', (iPads, android, etc) but not really said anything about it. I like to think of it as 'Dark Fall - Zero', as it takes place on the same night as the first game. Thus, it has no number, and will be only known as Dark Fall - Dowerton Experiment.

The hotel looks a lot more detailed, (it has a front!!), and the Junkie Hell of Lost Souls has gone. In Lost Souls you played as The Inspector, seeing the world through the eyes of a very Conservative and dying man. He had a very warped view of the world, which was evident on screen. It was his Nightmare, not ours. So, the hotel of 'Dowerton Experiment' is back to a hollow shell of its own memory, waiting for two plucky ghost-hunters to go missing.

Modern day: Students Polly White and Nigel Danvers are investigating The Station Hotel at Dowerton. It is a place of unexplained 'disappearances' and strange phenomena. The place has been closed since 1947, when several guests and staff members vanished without trace. Polly and Nigel are conducting an experiment, into sound waves, unseen energies and time. It is a paranormal hot spot, fertile ground for ghost stories and folklore, but what's the real story? Can a place really 'store' the memories and actions of the past? 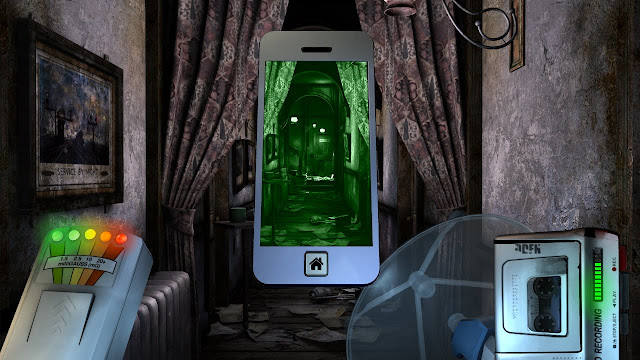 Proving the existence of ghosts is the goal, part of the students course work for Weymouth University. Their tutor, Henry Cuttle, is worried. The students haven't made contact for several hours, after garbled messages about there being 'something in the digital feed'! Could they have done it? Have his students captured genuine 'supernatural' activity? Jumping in a cab, Henry Cuttle makes his way to the site of the experiment. As darkness falls, Henry arrives at his destination. The old abandoned hotel awaits.

This is a standalone story, but older DF fans will enjoy the easter eggs and references.

It'll be fun to do a strict 2D p-n'c again, in first person, as I really love making them (and my DF royalties pay for ramen noodles and Netflix).

My first game, The Displacement, was made in 1998, and then sent to anyone that was interested. It went down really well, and had my family competing with each other in the most shameless fashion. I'd promised a prize, to the winner, you see.

So, there was lots of pleas for hints. I remained tight lipped. The prize was won by my middle sister, Rebecca, if memory serves. Anyway, it's what got me thinking about making point and click games for real. I learnt Strata3D and Director, at college (two year B-Tec), and got stuck in. That would be around 1999, when I created the first playable of Dark Fall - Displacement (as it was then called). It was based heavily around the mood and style of Sapphire and Steel (A Brit TV show), as well as mimic the studio set in lots of ways. It was a cool set, I'm still obsessed with that set.

So, I consider 2000 the time of DF, the construction and first audience feedback, but I'm tempted to shunt 'Dowerton Experiment' forward to this year, as it's mostly done. It's using Unity and Adventure Creator, but has very low system requirements. The resolution is good, at 1280 -720, which will look nice on tablets and okay for desktops. Here it is running on an older Android Samsung tablet and the desktop! So, it's a multi-platform game, for sure.

Lastly, the demo reel also showed footage from my re-booted GHOST/watch. The original was a 2D game, in which the gamer viewed a haunted location through a series of spy cams. The host of the event 'GHOST/watch' gradually opened up more cams to view as you progressed through the game. In between trying to capture ghosts, the hosts presented the gamer with little casual (and quite warped) puzzles, to advance your skills. It was fun, and worked quite well, on devices. But, it fell by the wayside, around the time of Midnight Horror. Having let it fester for a while, I went back to it, and pretty much junked the whole idea. I didn't like the 'virtual' experience, not actually being at the location, so re-booted the game. It's now a great setting for DF5. Welcome to Shangri-La...

I know, I know! How many unfinished jumpers does one guy want to knit?! [Angry Emoji].
But, fact is, it's very likely to be DF5. I love the location, and all the back story I've created. It's a house with a lot of history, mostly bad, and some of it very bad, and it's been mentioned in a previous DF. It's a first person, point and click adventure, with an UrbEx vibe. You get to pilot a quadcopter drone, which helps get into sealed off areas, like a rover, while also taking part in the GHOST/watch experiments.

It's also really scary. I can't really say why, but this location creeps  me out the most of any that I've made. Actually, scrub that, Vera's house in Blackenrock is the most frightening. Oh goodness yes. But, I'll leave that for you to decide later.