on May 21, 2020
Many, many years ago, one of my first jobs in rural Kent was 'cellar boy' in an old pub called 'The Chequers'. It was run by an eccentric couple called Len and Joan, who had been guvnors of the place for decades. My mother was a regular, back in the 1960's, and knew the couple very well. Len was a larger than life sort, stomping up and down the bar wearing a pith helmet and spouting lines from the Goon Show. He had the respect in the villages.


Like a lot of rural pubs, the place hadn't changed much over the decades. The electrical work was all self installed, no fridges for the mixers or softs, or wine. There was either white wine, or red wine, as the Chequers was in the heart of Hops country. The landscape around West Farleigh is still dotted with 'Oast Houses' the conical towers, which once dried the hops, they are now holiday cottages and posh bedrooms (a devil for wardrobe space though). Hops make beer! The air on some Summer days was intoxicating, literally, as the hop dust covered everything in a yellow powder. It hung on the air. 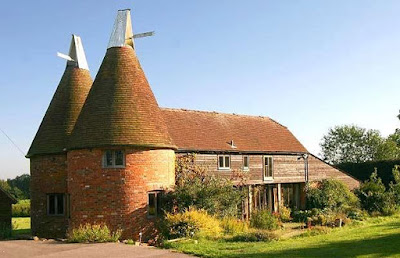 In these Summer months the migrant workers would arrive, often taking over the Public Bar in an evening, enjoying some raucous games of pool and pissing all over anything they could. It was okay, the place was built for it, and the workers returned every year to pick the hops and piss about in the pub. The ladies of the village were all safely stashed away in the Saloon Bar, which was Joan's (land lady) domain. This was the era of Gin & Lemon, and Sobranie cigarettes. But, the walls of the Ladies Saloon were a shock. It was a tiny cubicle space, but the entire wall surface was papered with ladies porn! Male flesh in every direction, and sausage aplenty. Back then the Johnny machines were in the Ladies too, and I guess Joan thought the Ladies wouldn't mind an eyeful in-between gins. It was all a bit Darling Buds of May, truth be told. My sister would often meet me after work, on her horse, Flash. I only had a BMX, but we would travel home across the Apple orchards and strawberry fields together. Sniff.

My job at The Chequers was to clean and relight the pub fireplaces, which as you can see from the old chimneys, were many. Each of the two stacks connected to many small fireplaces throughout the building. After, I would clean both bar areas, polish the tables, lay out the beer mats, clean ashtrays, restock the mixers, clean the Phone Box outside (original) and finally get down into the cellar... 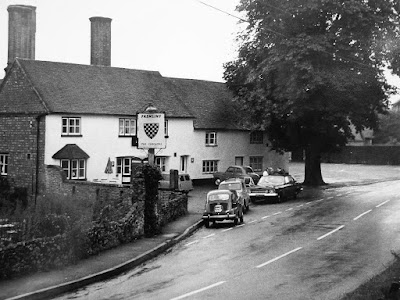 The cellar of the Chequers was dark, very old, and had many nooks and crannies. All the pub stock was kept down in the cellar, alongside ancient bottles of Brandy (I only sipped once!), bottles of Canada Dry and mysterious old trunks full of papers, books and more bottles of Brandy. Scrubbing brass barrel fittings was a long job. The taps were often green, with mould, scrubbed off with a Brillo pad and left for 'changeover' of the barrels. This was all done in semi darkness, as the lighting in the cellar could be described as 'home made' at best, it would flicker when Len (landlord) walked back and forth above, in the bar. There were many occasions when I heard people walking above, before opening, but could tell it wasn't the landlord. Just a feeling. That pub was old, 17thC, at least, and the foundations were likely very old. The pub dog, Rambo, a huge German Shepard would often react very strangely throughout the pub, but especially if I went down the cellar. He'd stand at the top, waiting for me to come back up. The only time he ever whined, actually.


Parts of the cellar were unlit, as there was no use for extra storage space. The vaulted rooms were pitch black, smelly and very creepy. There was one room that I only entered once, never again. It had a square hole in the middle of the space! It was too dark to see the bottom, and the hole was left uncovered. There was something moving down there. It absolutely terrified me. I've never been so scared as I was that afternoon, kind of transfixed on the spot. But, I swear to God, that I felt something looking back at me from that dark pit. It's just given me goosebumps to think about it, and type these words. Leaving the cellar, out into the Summer sun, I became aware (probably for the first time), that evil dwells in the dark spaces. Things, creatures if you like, that live in the darkness.

The Highwayman Inn, in Blackenrock, is based on my old experiences in Kent pubs. They are some of the creepiest places I know, with Hawkhurst or Goudhurst, being number one spots for me. Old villages, that still have a lot of identity today. Those country villages look so pretty on the postcards, but I suspect pretty much every village in Kent has a nasty story or two. I will never know what was at the bottom of the pit, as the pub has since been revamped into the 'Tickled Trout', but many, like me, will remember the creepy Summers and Winters in The Chequers Inn.