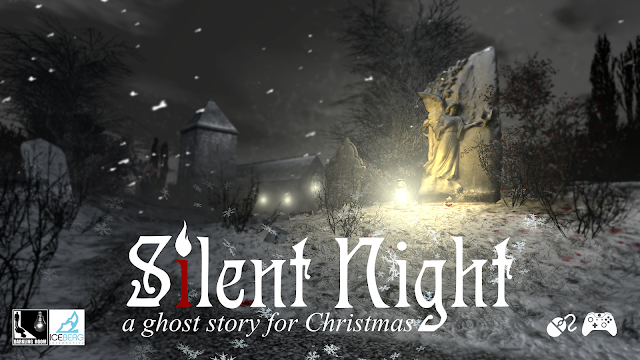 There is a 'presence' haunting the long forgotten church at 'Northfield'. Angry spirits seek revenge for an ancient crime, from the terrible time of The Black Death. Ghost-hunter, Nigel Danvers, has been sent to investigate the case, using his kitbag of ghost-hunting gadgets, on the loneliest night of the year.

A new 'Lost Crown' Winter Special is coming this December!

It is more than likely that Nigel will make his way to Blackenrock* before the first snow fall, but just in case, the moment has been prepared for, with a brand new, sparkly instalment of the popular 'ghost hunting' adventure games.

Do you believe in ghosts?
You know, the old fashioned kind, like the Gray Lady, the hooded monk or the disappearing child?

It's Christmas Eve, in rural Anglia. A bitter snow storm has driven the country folk to the warmth and safety of their household fires, as a bleak midwinter drowns the world in white. The storm has disturbed the spirits, the ghosts of Northfield from ages past,  they wander the Carrion Woods and long forgotten graveyards.

Some are lost souls, damned by actions long ago, whereas others seek revenge and retribution. The landscape was once ravaged by a great pestilence, The Black Death, when the simple folk of Northfield were decimated by a plague of biblical proportions.

The church turned its back on the 'people of the woods', left alone to die on cold and misery. Tonight, Christmas Eve, they have risen to seek retribution. Can Nigel Danvers, local ghost-hunter, solve the case? Using ghost-hunting gadgets and detective skills, the secrets of Northfield are about to be revealed, for the first time in 700 years.

'Silent Night - A Ghost Story for Christmas' is created by Jonathan Boakes (that'll be me), as a new Festive installment of the 'Lost Crown' ghost-hunting series. The locations featured in the Crown games are always based on real places, hidden away in the Cornish landscape. The Lost Crown (2006) was set in the fictional town of Saxton, which in real life receives many 'Crown fans' each year, looking to retrace the footsteps of the ghost-hunting protagonist 'Nigel Danvers'. So, using real locations in essential for the series, and Silent Night is no exception.

Building a whole church, inside and out, was quite a daunting task. It's not just columns and gothic windows to recreate in 3D, there are several impressive monuments, like the 15thC slate carvings and a Tudor Era 'Rood Screen', or the famous statue that resides in the Chapel. Utilising a mix of low poly and high poly photo-grammetry, the church started to take shape during the Summer, bit by bit.

I have visited the 'real' church at Duloe, (St.Cuby's in Cornwall), hundreds of times, in different seasons, including three times with snow! And I also know a lot of Crown fans have been up there, to re-live some of the game moments (always making a donation, thanks Vicar). It's an unusally large church, for these parts, which always intrigued me, with lots of genuinely antique items and an old Druid Stone Circle a, umm, stones throw away. It was also the centre of big legal controversy, back in the 1830's, but I'll save that for another blog.

So, it was important to capture the place and represent the location in 3D as well as possible. Basically, it HAD to look the same, and continue the vibe so beloved of the original game.

The Carrion Woods are another location, well remembered by Crown fans (that's you, probably), so I've made sure to keep plenty of the twiggy pines, while opening up previously unseen areas.

There are ruins in the wood, of old stones and long forgotten homes.

If you've played The Lost Crown you will know that the pine trees have grown out of a very significant site, of huge archaeological value. Silent Night re-explores the history of the place, in greater depth and offers a chance for a bit of India Jones action, later in the story. ;-)

A bit of a dry subject for an announcement blog, but I know some of you may be concerned about how you interact with the game.

I favour the Windows XBox Controller for pretty much every game that supports it. I used to be a keyboard/mouse gamer, until I realised all the games I wanted to play were on Playstation, with PS exclusives like Condemned 2, Clock Tower, Siren, Fatal Frame etc etc etc... there were a LOT. There are less exclusives these days, usually most games get a PC release (even Arkham Knight, in the end) so I drifted back to the PC for gaming, but kept my new found love of the GAME CONTROLLER.

But, not everyone wants to interact in the same way, so I went to the lab and created a hybrid! You can play, survival horror style, in free movement, or play the point-and-click version instead. There are NO scenes that rely of dexterity or quick movement (no more than The Lost Crown) so there was no point alienating the old school.


I like to play a point and click now and then, the feel is different, the pace is different, so it'll be interesting to provide both. Plus, it means I get to dictate some of the camera shots again! I don't lose Directorial control over what people look at, so I can frame some shots, do some wicked high angles from the church rafters and include some excellent camera sweeps and movements for dramatic moments (cutscenes).

So, just to wrap up:

Silent Night is a new, ghost-hunting adventure game from Darkling Room, for Winter 2018. It is a hybrid adventure offering free movement on the Win XBox Controller or keyboard/mouse, as well as a traditional point-and-click mode for old school gaming. The story is a Wintry tale, with references to classic supernatural fiction and lore, including M.R.James, Thomas Hardy and of course, Charles Dickens. Dust the frost from the ghost-hunting gadgets, and head off to Northfield for a chilly festive fright! 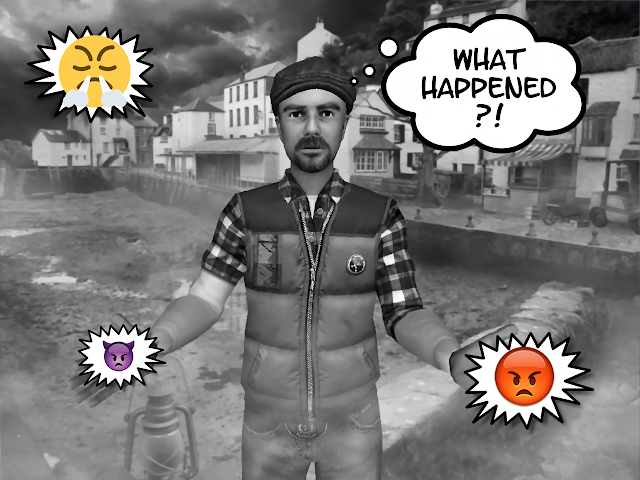 * We are still working to get Blackenrock released ASAP, but this gave me an opportunity to make something cool and creepy for Winter, while we finish off. And, if I'm honest, it's the best thing I've ever made. I'm genuinely thrilled with the new freedom and technology, wishing I'd done it sooner. But, this doesn't mean Blackenrock has been forgotten. The opposite, it's just being managed much better, which is what it needed. And, I'm hoping it appears before December!

I spent a very long time writing TLC2 and 3, and recorded hours of dialog, it's no mean feat to create something so big, so I will see it through. It's good too. Much better than before. So, sorry as always for the delay, but trust me when I say it's coming ASAP.
But, for now, rest assured knowing that the Crown games are alive! So, please try to get behind me on this one, you don't have to be super nice to me (and some are really not that nice, you know who you are), but please get behind this new game, as it's been a lot of hard work and effort. Plus, it's quite cool. ;-)