Blackenrock is out the end of November, early December.

No-one releases new games for Halloween, it seems, as it's the season of Sales and Bundles, especially anything ghostly or horror orientated. But…

I'm releasing a game anyway. It's a proper game, with all the Crown trappings you'd expect, and it's actually set on Halloween. There's a mystery to uncover, ghost-hunting gadgets, a séance, and lots of traditional Halloween games.

Midnight Horror a standalone ghost story, a celebration of Halloween, but also acts as a re-introduction to the Crown world, and the people of Saxton. Most of the harbour folk make an appearance, including Mr.Tibbs (still loving blue cheese, apparently), Nanny Noah, Lucy, Station Master, Bob, Rhys… etc etc! So, you could say it's a Prologue to the next big one, with a whiff of the Ealing Comedies and Hammer's smaller productions. There's lots of foreboding and suggestions of what's to come, as supernatural forces start to make themselves known to our ghost-hunting hero. 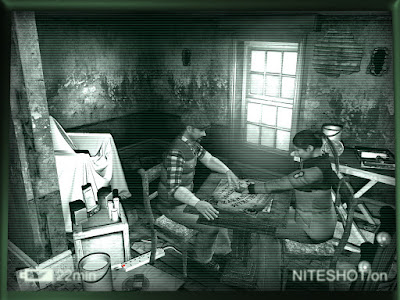 The game will be available online, Steam, but also from me, directly, DRM free in the near future. I also want to make a lower res version for laptops and smaller desktop resolutions.

Production: It's been a frantic month, really productive. After deciding the big game would benefit from a Nov/Dec release, it became obvious that Halloween was available for something 'else'. So, burning the candle at both ends, and working furiously, has resulted in something quite special. I've received super help from Matt Clark (Barrow Hill) and Jan Kavan (Julia, Ghost in the Sheet, Destinies RIP), who program much better and faster than I do, and had enormous stressful fun organising actors and recording sessions. I haven't experienced anything so frantic since college! 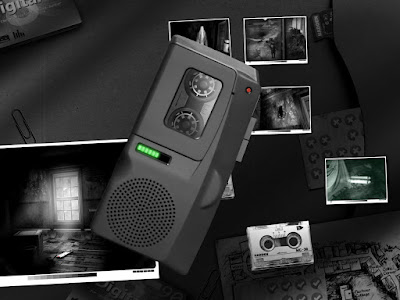 Nigel's assorted, mish-mash of Ghost-Hunting Gadgets get a dusting down, in Halloween Horror.

An EVP is a voice recorded to otherwise blank cassette tape, or a mp3 voice recorder. There are E.V.P's. to locate, both indoors and out, using  the trusty old Dictaphone (or voice recorder if you are more up to date). How do the voices get recorded to the cassette tape? Is it interference? A glitch in production? Unlikely. So, instead we are left with a mystery. Who's voice is that? And what do they want? 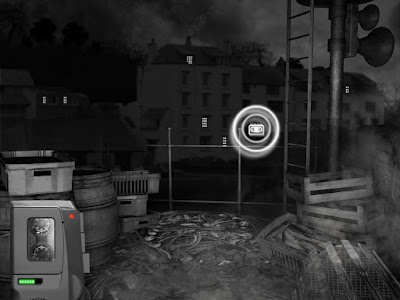 This element of the ghost-hunting is a lot more interactive this time round, with a need for you to locate the spirit voice yourself. It's a lot more eerie and satisfying.

Nigel is much better at recording and storing evidence now. If he suspects supernatural phenomena he takes a photo of it. I'm not sure Nigel is expecting much from The Bear's Halloween Party, believing its all plastic spiders, cheap gimmicks and profiteering. But he's wrong. 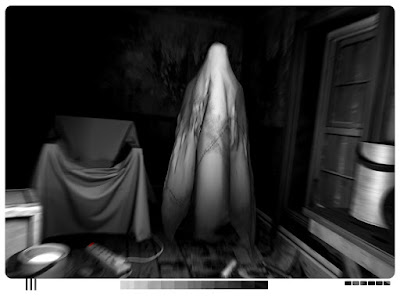 It's an important night in the old calendar, when the veil between the living world and the spirit world is at its weakest. In other words, if a ghost is trying to make contact, tonight's the night!

The E.M.F has always been Nigel's 'early warning system', when it comes to ghosts! It picks up on unusual, moving and impossible energy waves. Some have theorised that the energy is the first manifestations of a spirit form, or ghost, to you and me.

The device works by picking up on 'artificial' energy waves, and began its life as an everyday tool. People worried about nearby power lines, transformers, leaking microwaves are able to measure the amount of energy being picked up by the unit. Basically, is it a dangerous amount? Something unhealthy?! But, beyond the everyday, the EMF Meter soon became the number one gadget for ghost-hunting. These days you can get multi-meters and all sorts of nifty kit, but Nigel still relies on 'the brick', his old fashioned EMF. It still works, as you will find out.

To see in the dark is a strange thing, to this day. There's something about that greenish tint that instantly suggests 'trouble'. Found Footage movies have utilised spooky night shots to great effect, creating a film genre of their own. I love that kind of thing, so there are a few first-person night-vision sequences. Nigel has become quite good at conducting séances and vigils.

The Bear is hosting a big Halloween Party, with party games throughout the pub. It's known locally as the Halloween Triathlon: Guess the Ghost, Pin the Tail and Musical Statues. The games can be easily recreated at home, if you fancy trying the games on the 31st. Most will be familiar with the games, but just in case, here's a quick reminder. 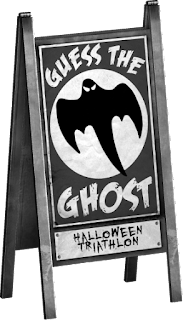 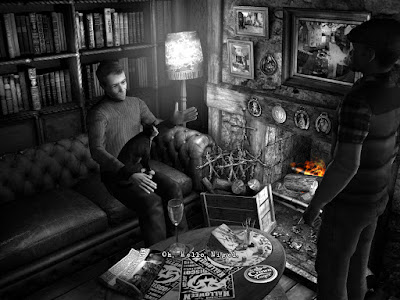 The question cannot be 'who are you', obviously. The game works best if the Ghost-Hunter is removed from the party, so they are unaware of who is missing from the group. Also, choose a good spooky spot to host the game, away from the others. In Midnight Horror, Morgan has set up a space in a disused room above the pub. There are lots of people at the party, so guessing the identity might be harder than you think. 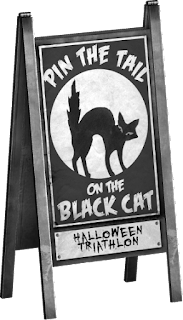 Blindfold the participant, spin them three times, and then ask them to Pin the Tail on the animal cut-out. This is usually a donkey, for some reason, but we've opted for a Black Cat. It's a simple game, a bit humiliating, which everyone else seems to enjoy more than the player. And, in Nigel's case, while he's dizzy and disorientated he gets more than he bargained for. 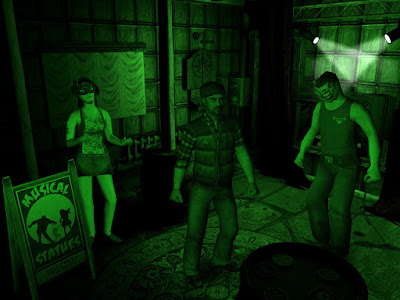 Keep dancing while the music plays, freeze when it stops. Anyone 'moving' is disqualified, until there is only one left. In Nigel's case, we know he's a bit of a stiff, so you'll have to try to match the tempo of the music too, to make him at least look as if he's enjoying it. Also, keep your eyes peeled during the Musical Statues, as something else can be glimpsed during the 'freeze!'
Finally, there's an old Halloween Favourite, in the form of… 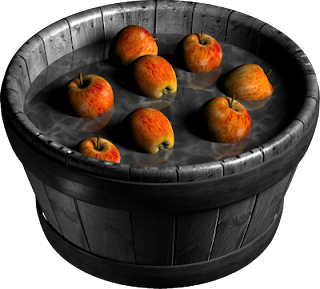 Try to pluck as many apples as possible from the barrel of water, with your mouth. Hands should be behind your back, or tied. In Halloween Horror, Nigel is expected to get a score of six, or more, to win a prize. Apple Bobbing is an old game, from pagan times, which makes it a little bit creepy. A sliced apple reveals the pips form a pentagram shape, which led superstitious folk to believe the apple (their apple, fished out from the water) was a form of divination.

Worm = prosperity (believe it or not)

So, good luck! Enjoy the game! It's been a blast to make, in so short a time, and it acts as a super Prologue for Blackenrock, as well as a seasonal title in its own right. The publishers are using the word intermezzo, which is nice. Not sure what it means, beyond a tasty treat inbetween the main  dramas, but that's exactly what Midnight Horror is. A bit of a drama!

P.s. Sorry Matt! Sorry Jan!! But also huge thanks. The system that is now in place for future projects is so much better than the cave I was working in. It's been a blast to make this game with you, and I hope it hasn't put you off. ;-)