The Ghost-Hunting Adventure finally arrived on the 18th, when The Lost Crown finally made its way to stores in England, Scotland, Wales and Northern Ireland. It is wonderful to finally have it in Britain, given that the game is, without doubt, the most 'English' game ever made; crumpets, miserable vicars, pasties and a none existent train service help cement that fact.

The box art looks great, (thanks Akella!), and Lighthouse have done a super job getting the game recognised outside of the USA. The advertising is super, bold and eye catching; like this Ad in the front cover of The Fortean Times. It was weird opening the mag to find the game staring back at me! I just hope the game pleases those that have been waiting...patiently. Price-wise, the game is a bargain at around £15! 36+ hours of gameplay! Amazon, Play and Game have stock (I've heard its sold out on Amazon 3 times over) so what are you waiting for? 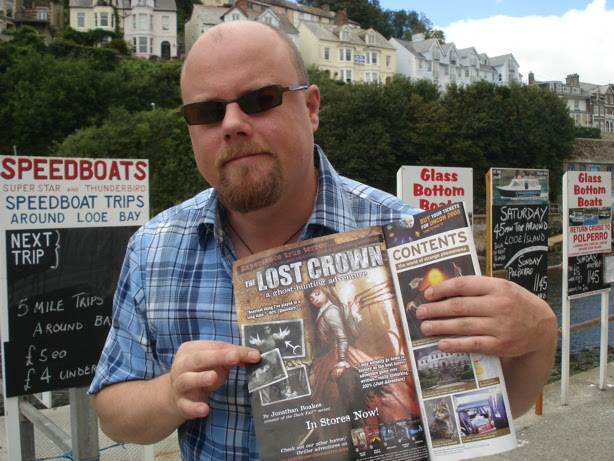 Don't forget to post a review, post play, on Amazon, Play or Game; if you enjoy the game DO say so, as for every "I liked this game" there's some idiot who states that the game will "ruin your life, burn down your house, and eat your cat". I suspect someone like my mother is behind those reviews! :-) ...

It's been a while since I posted a blog. I would love to say I've been busy with the next game (more on that in a bit), but I can't. I went on a cruise! The Carnival Splendor, a huge US 'Fun Ship', on its inaugural voyage. Some of the press are saying its the biggest cruise ship in the world, which I can believe, having travelled on the beast, and got lost in its endless corridors, bars, casinos, restaurants, discos, decks...etc etc...you get the picture. But. First voyage, massive ship, elegant staterooms...hmmm...anyone else thinking Titanic?! They even played the film theme in the Piano bars! There's nothing like asking for trouble, is there?! Good news is, it didn't sink. Phew. There are few Icebergs in Dover, so i think we were safe. Mind you, it didn't stop me wandering the ship, after midnight, looking for Penny Pringle and Vlad. (Titanic: Adventure out of Time characters). There are photos in my 'pics' area, if anyone is interested...some are nice, some are horrid. Be warned, there's a nasty pic of me with a mouth full of hot dog. Not good. Or lady-like.

Lastly, I am working on a new game. Yes. And, it's going to be super. I love the setting (new), the established characters and the threat. It's not as quirky as The Lost Crown, but will use some of the elements created for that game. Those who know my previous games will recognise many plot threads, with some loose strands being tied up. As far as titles go, the game will be called Dark Fall III, which is exciting...to continue the series. The subtitle gives LOADS away, so I'll hang on to that for a bit. In the mean time, rest assured in the knowledge that I am working, very hard, and making the best game I possibly can. It will be point and click, mouse only, with loads of puzzles (of every kind), made for XP and Vista, with adventure fans in mind.

The setting is horribly spooky (I'm surprised the location hasn't been used before), and really does provide a perfect stage on which to tell a ghost story; with lots of stony passages, dark pinewoods and long forgotten hallways. Horror-wise, this game will scare people; I'm constantly leafing through the game document (which is a bit like a walkthrough, for me to keep on top of the story) and adding "more creepiness here" and "needs a jolt here". If you found the crypt ghost or Ager Brothers spooky you may wish to start on breathing techniques now. In all honesty, I love spooky games, and want to make the next Dark Fall as weird and wonderful as possible. Fingers crossed, you should be playing the game by this time next year. I'm aiming for dark nights, as always, but we'll see how it goes. Deadlines have a way of flying past, at an alarming rate. But, one thing is for sure, I will be continuing the series (as its called) with this next game, with more to follow. The Dark Fall is coming...again...and it will know your name...

Get out in the sun!

Anonymous said…
The games just keep getting better and better; can't wait for the next one, having read this. Not quite finished Lost Crown yet, but just wanted to thank you for a) scaring the bejasus out of me and b) having me laughing out loud ("I'll go over and see if she wants some pork") in the space of 15 minutes or so. Now stop posing with magazines, and get working on that game!
18 September 2008 at 15:09

Jonathan Boakes said…
Ha ha! I'm glad someone liked the 'pork' line. I wasn't sure if it was too much...but, as it turned out, I think it passed many people by. Anyways. Glad to hear you like the game, Michael, and rest assured that I am busy making the next one. Today was spent photographing dirty light switches. Oh the glamour! Jonathan.
18 September 2008 at 16:19

Yer_man_in_japan said…
Congratulation on the successful UK launch, and all the best for the new project!
18 September 2008 at 20:33

Anonymous said…
It's a dirty job, but someone's got to do it. You obviously love your work - that shines throughout the games, and undoubtedly is what makes them so engrossing for we mere players. A couple of final Lost Crown comments, then I really must go and walk Big Yellow Labrador. First, a very slight criticism; the occasional grammatical whoopsies such as apostrophe errors in the museum info signs did tend to pull me out of your world briefly - please consider treble- or quadruple-checking such things. And finally, before I shut up, I love the little references in the game (such as the animal skins drying on the beach), of which I'm sure I've missed more than I spotted. Thank you, thank you (drifts off into wibbly nostalgia reverie...) ah, how well I remember first awaking in that dirty old railway tunnel in Dowerton.....
19 September 2008 at 03:28

Anonymous said…
Jonathan-I just love how you write your blogs. It's like reading a journal, although I guess that's how it's supposed to be. It's so iteresting and engrossing. I have to agree about finding those papers you used while playing a game. And I think that one you mentioned might have been "Seven Games for the Soul" also called Faust? I don't know, but I thought I'd mention it. :)
20 December 2008 at 00:04

Anonymous said…
I can't wait for plot threads to be tied up!! I hope we get to see some characters that we know and love from past games. Characterization is the biggest thing for me, along with plot, so feel free to expand on characters' pasts and their stories. :)

Jonathan Boakes said…
Ah ha! Faust! Yes, that is most likely. I guess the name gives it away. I really liked that game...surreal, psychotic and very colourful. I think I liked the underwater, Frank, setting the most...it had Marvin Gaye's Nature Boy playing as a backdrop, if I remember rightly. Great period setting...a little like the Carnivale TV series. Loved that too.
21 December 2008 at 09:50

Anonymous said…
Andrew was my dear brother, very badly treated in life. He would have loved your video.